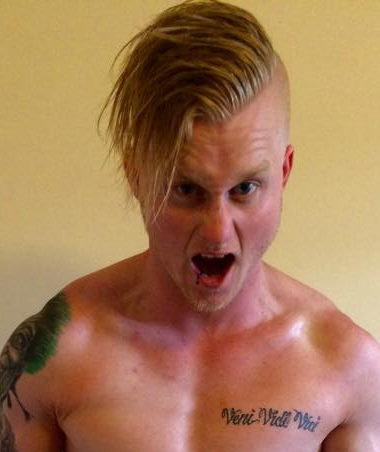 Tim Kade, the charismatic Australian Pro Wrestling star who holds Australian local promotion PROWL’s HULK championship title, has his eyes on coming to China to debut on Middle Kingdom Wrestling’s January 16, 2016 event!  Tim Kade not only prides himself of being a flashy heartthrob, but he cares even more about landing his hardhitting strikes and wonderful moves that he is known for in the Pro Wrestling scene in his native Australia!  And he hopes to give the Chinese Pro Wrestling audience a chance to see what exactly the Austrlian Pro Wrestling scene can bring!

Tim Kade has in fact already crossed paths with some of the talent booked before MKW’s show, including Singapore Pro Wrestling Junior heavyweight champion “The Statement” Andruew Tang – from Kade’s native Australia, to Tang’s native Singapore. And each time, the brutal wars these two had left the world in shock and awe.  What’s going to happen when Tim Kade arrives to the MKW lockerroom in Dongguan, China and Tang and Kade once again crosspaths?  What does this mean for the six man special international tag team match that has already been booked for the January MKW event?  We have heard details that Tim Kade’s MKW contract requested a match that puts him at odds against Andruew Tang!  This deal with Tim Kade has developed just recently and the MKW card is definitely set for a major shake up! A GOOD shake up!