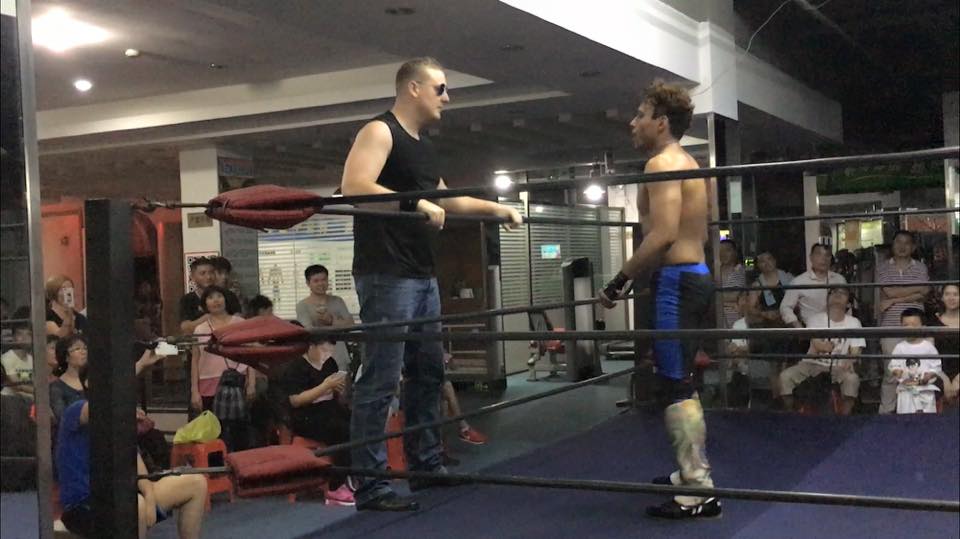 More chaos occurred between Big Sam, Black Mamba and Ash. On a CWE show that was held in Dongguan on the 21st November 2015, Ash was defeated by King Michael due to the distraction from Big Sam and the interference from Black Mamba.

Ash fought a tough battle against Hong Kong’s 160kg monster King Michael. Ash took the giant of Hong Kong off his feet multiple times by using his quickness and agility. After Ash finally turned King Michael over and locking in a modified Texas Cloverleaf, Big Sam and Black Mamba made their way to ringside. Big Sam jumped on the apron and cause Ash to release his hold and as these two guys went got in each other’s face. Ash as clearly not happy by the presence of Big Sam and Black Mamba, however it didn’t end there as Big Sam cockily slapped Ash across the face after an exchange of words. The referee then came over to demand Big Sam leave the match leaving Black Mamba out of Ash and the referee’s sight. Black Mamba hit a hard low-blow and left the ring leaving Ash a helpless victim for a recovered King Michael, who then picked up Ash and dropped him for the three count via his trademark chokebomb. Big Sam cockily counted the three count along with the referee. Ash was clearly annoyed by this incident and demands that he will seek revenge at MKW’s January show where he will be joined by two international superstars to even the score in a global 6 man tag.

Later that night Black Mamba defeated CWE’s Mr. Chen in an epic match that showed the newly created Chinese style called kung fu wrestling, which incorporates elements of kung fu into the pro wrestling match. Black Mamba won after some assistance and distractions from Big Sam. Mr. Chen fought hard and well but after a devastating powerbomb from Big Sam he struggled to regain any offence he had earlier on in the match. Right at the end of the match Mr. Chen had a comeback when he hit his version of a pop-up powerbomb but Big Sam again distracted the referee allowing Black Mamba to hit the low-blow for the three count.

A lot of fans were not happy by the antics of Big Sam and Black Mamba and believe their needs to be some sort of ruling to prevent further disruptions. Big Sam who has been recovering for the past several months since his major surgery op should be clear to wrestle in January. MKW’s owner, Adrian Gomez, has yet to make comments about any of this. Big Sam and Black Mamba have been a thorn in the side of Ash since they first met during the special championship tournament back in the summer.