TangGuoGe — or we can call him Candy Brother — comes from the sweetest places in our hearts.  He wears a mask made of candy wrappers and  has a large following of young fans all over the world.  Starting his career in a small village in Mexico, the same village where he worked in a candy factory since 7 years old, Candy Brother noticed that no matter how many pieces of candy he had, he never seemed to get any cavities.  His dentist claiming he had, “los dientes de dios!” (the teeth of god,) Candy Brother decided to leave his village and share the joys of candy with children all over the world. His next stop — China. And he knows, with MKW championship title around his waist, he will be able to take bookings all over the world to not only defend the title with pride, but also share the wonders that are chocolates and lollipops.  MKW welcomes this skilled lucha style wrestling into the MKW tournament to decide the FIRST MKW champion ! 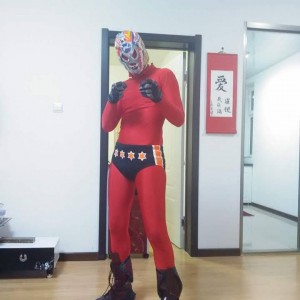